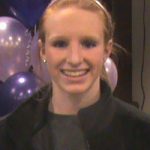 Michaela Woodford originally hails from Akron, Ohio but currently lives in Gainesville, Fla., where she trains at Sun Country Gymnastics Club. She first discovered the sport at age two-and-half at a Mom & Tots class. Her sister Ellie is also a gymnast.

Aged 17, Woodford is a junior at Bucholz High School. She has learned to budget her time to keep up with school work, often working ahead when she has a spare moment. She is an honor roll student and a member of the Spanish Club at her school.

After overcoming a broken heel, Woodford says her work ethic and determination have been essential. Regaining the strength in her ankle was frustrating and tedious, but she is once again competing at Level 10.

“The best thing about gymnastics,” Woodford said, “is hearing my teammates cheering for me and sticking my landings.”

She does a full out dismount on bars and would like to compete in the all-around in college. Woodford has made a verbal commitment to North Carolina State University.