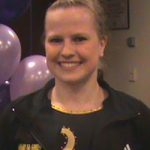 Sixteen-year-old Tory Wilson of Albuquerque, N.M., began doing gymnastics at the age of four with a half-hour-a-week tumbling class and she has never slowed down.

A senior at La Cueva High School, Wilson works hard to maximize her time at school and keep up with her training. She usually works out for an hour in the morning before school, and then trains for another three plus hours after school each day.

“If I want it, I believe I can get it,” Wilson said. “I’m strong-willed and I don’t let fear get in the way of my goals.”

Wilson trains at Gold Cup Gymnastics Club and she enjoys working on the uneven bars. Her most unique move is a Tkatchev connected to a Geinger. Wilson has been competing at Level 10 for six years.

“The best part of competing is showing everyone what we’ve all worked so hard for,” Wilson said.

Wilson plans to attend the University of Utah on an athletic scholarship. Her ultimate goal is to be successful and happy in college gymnastics. She also enjoys reading, going to movies, the outdoors, listening to music and spending time with her friends, as well as traveling and seeing new places.