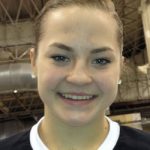 It’s hard for the lights to get any brighter than in New York City, but they’ll be shining on Grace Williams at the Nastia Liukin Cup.

The defending champion is back and has her eyes set on a second-consecutive title.

“It’s awesome just to say I’m the defending champion going into it, and knowing that people already know that they want to beat me even more,” Williams said. “It means I went in there having the same mentality, not expecting anything, just do my best. If it worked this time id be awesome to say I’m the defending champ of two years. That’s pretty cool to say about yourself.”

Williams seems to have it all figured out.

She knows her competition is made up of some of the best young talent from across the country, but Williams didn’t let herself get intimidated by them. Nor did she let the magnitude of the event distract her.

“I didn’t go into it to win, just went in to have fun, and enjoy the experience of competing on a podium again,” Williams said. “You know it’s the top girls in the country that are competing for the title and it’s on a podium so it makes everything look a little bit bigger.”

But that shouldn’t bother Williams.

The 15-year-old from Linden, Mich., grew up with two brothers, Jordan, 22, and Cameron, 12, who didn’t giver Williams a break because she was a girl.

“They’re not going to take it easy on me just because I’m a girl,” Williams said.

And it didn’t help her neighborhood was mostly boys around her age. When she was 11, Williams was playing football with her brothers and their friends, but nobody wanted to tackler her because she was a girl and they thought she might cry. Williams responded by telling them it’d be OK if they tackled her. So, she came home with bruises and scrapes but never complained a second.

“I didn’t let it affect me,” she said. “I just thought of myself as playing to win.”

Just as Williams does in the gym.

She comes to practice with a lunch-pail mentality, coach John Geddert said. She’s constantly working hard to improve, while her teammates might be socializing.

But that’s just who she is.

“I kinda have an inner drive to be the best,” Williams said. “I don’t really accept anything other than what I know I’m capable of. I definitely have a strong mentality of what I need to do and what Ineed to get accomplished in and outside of the gym.

“I’m definitely a competitor. I was born with it. I just have a drive to win.”

Williams is undefeated this year, and is looking to continue that in New York.

Geddert put it simply: Get out of her way.

“I think she’s polished up some of her skills,” he said. “In gymnastics, it’s not necessarily the difficulty but it’s about how well you perform your skills. Things are straighter, higher, faster. Things are polished with a year of training under her belt. She’s a year more experienced as a competitor. She’s been there before.” 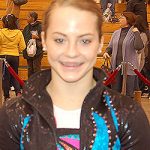 Grace Williams is the definition of cool, calm and collected. As well as training her body, she has trained her mind to stay strong in tough situations – not always the easiest thing to do when she isn’t performing to her expectations or is tempted to become distracted by the many things that run through a gymnast’s head during competition. The 14-year-old high school freshman has taught herself to let these things go and take challenges one step at a time, an accomplishment she recognizes as her greatest strength.

Williams began gymnastics when she was three years old. At age 12, she transferred over to Geddert’s Twistars USA in Lansing, Mich., under the direction of coach John Geddert. Since then, she has achieved a number of significant victories. In 2008, Williams was the Level 9 Eastern Champion. She began competing in Level 10 in 2009, and was regional champion in 2010, as well as a Junior Olympic national champion the same year.

Her favorite event is balance beam, where she performs a unique back handspring back layout back layout series. Making it to the Pan American Games is her short-term goal, and in the future, she would like to make the national team and compete in collegiate athletics for a Division I school.

Williams’ mother, Amy, was a track and field college athlete. Though she never competed in gymnastics, it was always her favorite sport to watch so she enrolled Grace in a class.