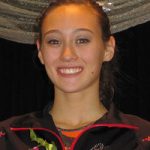 When her mom enrolled her in both dance and gymnastics classes at the age of three, Kiersten Wang learned to love performing, but gymnastics soon took over and became her primary focus.

Now a senior at Palmer Ridge High School in Monument, Colo., Wang, 18, trains at the Colorado Aerials gym. Most days she trains for 4 or 5 hours, but she still manages to keep up with school work and friends.

Although she was out of competition for a year with a broken leg, she came back stronger than ever. In a cast for six months, training for her comeback was especially difficult. Wang persevered, though, and has been competing at level ten for seven years.

“It was tough coming back from my break,” Wang said. “No one thought I would be able to compete again. But here I am, it was the hardest thing I’ve ever had to do.”

In 2012, Kiersten will be a freshman on the gymnastics team at the University of Florida where she hopes to be an all-arounder.