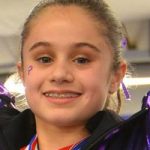 Meredith Sylvia’s goal is to make the USA Gymnastics National Team. She is only 13 years old, but has already won the Level 10 Pennsylvania State Championships in 2011, posting a total score of 37.625. She also took first place in the all-around at the Parkettes Invitational in Allentown, Pa., with 38.525 points, where she earned a berth for the Nastia Liukin Cup finals in New York City.

But behind the success of this girl from Macungia, Pa., also stands hard work, effort and determination. As a junior international elite gymnast, Meredith practices up to 36 hours every week at the Parkettes National Gymnastics Center, which is one of the nation’s premiere facilities for gymnastics.

Her coaches are Donna and Bill Strauss, former Olympic Games and World Championships coaches. Her favorite event is beam, and she says the most challenging event for her is bars.

Meredith started gymnastics in a ‘Parent and Me’ class when she was just 18 months old, and at just 11-years-old, she started to compete at Level 10.

As a lucky charm, she keeps a little key chain, which she got from her coach when she competed in Level 6.

In her spare time, she plays piano and has lessons once a week.

“I also like to watch my brothers play football,” she says of her two younger brothers, Ryan, 10, and Evan, 6, who are involved in football, basketball, baseball and karate.

Meredith attends seventh grade at Commonwealth Connections Academy, where her favorite subject is English. “I’m an A student,” Meredith says of herself.

As she competes in New York City, Meredith will be looking beyond the competition to this summer’s Visa Championships in Saint Louis, where she hopes to compete at the top level of the sport

“I like to set goals for my gymnastics career,” she says, adding, “My goal is to be on the Junior National Team.”