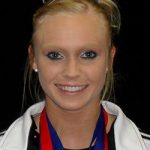 How many high schoolers do you know that look forward to school for the social time? Spending an average of 24 hours per week training in the gym will do that for you. 2010 Junior Olympic national all-around champion Rachel Spicer is an extraordinary junior at Marcus High School in Flower Mound, Texas. She has been a gymnast since she was five years old when her mother enrolled her in a class to see if she would like it.

The 16 year-old’s success has attracted attention and earned her a scholarship to the University of Florida. She won the all-around at the Junior Olympic National Championships in 2010 and has won three straight State championships, as well as two consecutive regional titles. She qualified for the Nastia Liukin Supergirl Cup at the 2011 Metroplex Challenge, where she was first in the all-around, uneven bars and floor exercise and finished third on vault. Determination is what she feels is her greatest asset to success in gymnastics.

“When I’m competing, I always feel like I go out confident,” said Spicer, who lives in Highland Village, Texas. “Going out and knowing that I can do this and not hold anything back.”

During her down-time,, Spicer enjoys going to the movies with her friends. Her favorite movie type is comedy, and she absolutely refuses to see anything scary. Spicer has committed to compete for the University of Florida, where she hopes to pursue her passion for math, when she graduates from high school next year.