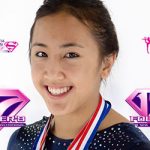 Some people just have the focus and pizzazz that allows them to accomplish anything they set their mind to. First-generation American gymnast Brittney Sooksengdao is certainly one of those people.

Sooksengdao’s parents, who immigrated to the United States from Laos, knew she was fit for gymnastics when she kept doing flips off the bed at just two years old. When she was five, they enrolled her at McCracken’s Gymnastics in Olathe, Kan. She’s been with coach Mary McDaniels for four years, since she was a Level 7. Now a Level 10, Sooksengdao savors the growing intensity of the competition and the things that she can learn from competing at the highest level.

She qualified for the Nastia Liukin Supergirl Cup at the Folger’s New Year’s Invitational held at Wichita State University and considers it one of her biggest gymnastics accomplishments. Her favorite event, by far, is floor exercise.

“I love performing and I love the dance,” Sooksengdao said. “The power, the grace of the dancing – I just really love the adrenaline rush on floor.”

She sees her greatest strength as her dedication to the rigorous demands of gymnastics and is always working to overcome the obstacles placed before her by staying consistent in her work.

At 17 and already thinking about college, Sooksengdao shares the passion of many gymnasts her age to earn a gymnastics scholarship, but that isn’t the only reason she looks forward to higher education. She also has an intense passion for design and architecture, which she expects will be her major one day. She is a straight-A honor roll student.