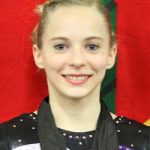 Mykayla Skinner is one of the few returning competitors from the 2010 Nastia LiukinSupergirl Cup. At the time she was just 13 years old, and finished an impressive seventh in the all-around competition and fifth on vault. This year, she is looking forward to using the experience she has gained during the past year to go even further in the competition.

Skinner began gymnastics when she was five years old, following in the footsteps of her older sisters. She trains at Desert Lights Gymnastics in Chandler, Ariz., and has been with coach Lisa Spini for three years.

Last year, Skinner won the all-around at the Fiesta Bowl Invitational, which qualified her for the 2010 Nastia Liukin Supergirl Cup. This year, she qualified at the Lady Luck Invitational in Las Vegas, Nev., when she tied for first in the all-around. She also competed in the WOGA Classic, where she finished 11th overall and second on vault.

Her goal in gymnastics is to make the National Team this year. She would also like to compete in collegiate gymnastics when she gets older, naming UCLA as her first choice. Her favorite event is floor exercise because that is where she has the most fun performing.

Skinner recognizes her hard-working attitude and accomplishments thus far as her greatest strengths. She finds it challenging to compete against many different young gymnasts like herself, but always strives to do her best.

Nicknamed Mikki, Skinner is looking forward to the possibility of attending a public high school next year because she has been home-schooled all of her life. In her spare time, she enjoys arts and crafts and likes to make jewelry. Skinner also enjoys being an aunt – she has four nephews and one niece, with a second niece due in May.