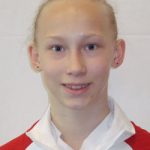 Polina Shchennikova has one goal on her mind. The Olympics.

Competing for the Nastia Liukin Cup is just another step in the right direction, the Denver product believes.

“Every meet is a step for me,” Shchennikova said. “It would mean so much to me and my family because we both know that I’ve been working really hard just to have that would pay everything else off.”

Despite competing at the Visa Championships, Shchennikova has been learning how to perform on a stage as large as the Nastia Liukin Cup in a venue like Madison Square Garden from her parents and coaches Alex and Katia Shchennikova. Both parents were “very high athletes” on the Russian Olympic team and now run the gym that Polina trains at, T.I.G.A.R. Alex and Katia nearly made the Olympics, Polina said, and both have been able to share that perspective with their daughter.

“They told me it was a very great experience and even if I don’t accomplish my goals I can be proud of myself for accomplishing it this far,” Polina said.

Polina missed out on the Nastia Liukin Cup in 2011 and spent the rest of the year thinking of ways to qualify in 2012.

“The experience is going to be great,” Shchennikova said. “I was disappointed that I knew I could do better and I would push myself to do it the next time.

“My season was just starting and I really wanted to start out with a good season and prove I could do it. I decided to make my goals to make it to the Nastia Cup.”