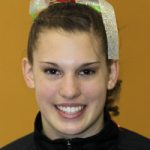 Baely Rowe’s family has always been into sports. Her sister, Bree, earned a soccer scholarship from the University of Oregon and her brother, Kelyn, was drafted third overall by the Major League Soccer team New England Revolution.

“My whole family is a soccer family,” the 16-year-old says. Baely herself used to play soccer until 8th grade. She then chose gymnastics over soccer, as she was becoming a high-level gymnast. “But sometimes, my family and I still go out and play soccer together.”

Baely practices 25 hours a week at Auburn Gymnastics Center in Auburn, WA, under coaches Brent Phelps and Peter Flores. This will be her sixth year as a Level 10 gymnast.

“It took a lot of time, work and dedication to get where I am now,” she says about her gymnastics career. “I really love the sport, as well as my teammates and my coaches. I wouldn’t know what to do without gymnastics.”

In 2009, Baely finished third all-around at Junior Olympic Nationals and qualified to National Team. In 2010, she was the JO National Uneven Bars Champion. She also lists qualifying to the Nastia Liukin Cup and her scholarship to Utah as her most rewarding accomplishments.

She qualified for the Nastia Liukin Cup in mid-February at the Charity Choice Invitational in Tacoma, Wash., where she took first place in vault, bars, floor and in the all-around. She is looking forward to going to New York City because she will meet her role model Nastia Liukin: “She is a beautiful gymnast and very elegant.”

Baely is a junior at Auburn Riverside High School and has verbally committed to the University of Utah, which she will attend on a full-ride scholarship starting in fall 2013. “I chose Utah because they were really interested in me when I was there, and I love the mountains.”