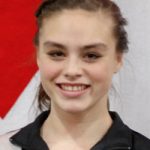 Mariah Peterson is an eight grader from South Jordan, Utah. She is currently 14 years old and has been competing in gymnastics for the past 10 years. As a young child, Mariah was flipping and doing back handsprings when her parents decided to put her in the gym.

Mariah currently trains at USA Gymnastics World with Charles Musgray, who has been coaching for 31 years and competed as a gymnast himself.

Musgray is proud of Mariah’s hard work. She is described as the chatty one and a social butterfly within the gym, but not in a way that affects her training.

Currently, Mariah is the top gymnast in the state of Utah and the only gymnast from the state to qualify for the Nastia Liukin Cup. Mariah says this as her biggest accomplishment in her career. Utah is rebuilding its gymnastics scene and competitors like Mariah only help to build the sport.

Last year, Mariah made it to J.O. Nationals and placed 15th in the all-around. She enjoys competing on beam because of the courage and focus it takes to get up on the four inch wide apparatus.

Mariah is one of six children and goes to a public school. She credits her classmates for being so supportive and understanding of her schedule.