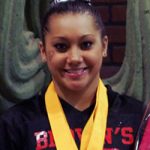 When Matalasiaufalga “Asi” Peko was three, her mom enrolled her in a gymnastics class because she had way too much energy and needed an outlet. She excelled and has been at it ever since.

Now 16, Peko is a junior at Coronado High School in Henderson, Nev., and part of a very athletic family. Her father, Tony, played football and her mother, Heather, ran track, both for the University of Nevada – Las Vegas. One of her brothers just signed to play football for Navy and her other brother practices Kung Fu.

Peko trains at Brown’s Gymnastics in Las Vegas. She loves the thrill of performing and competing with excellence. She has created her own special move called ‘the Peko.’ Her favorite events are the bars and beam. She trains for 4 to 5 hours per day. Peko hates to accept defeat and feels that mental toughness is essential for a true competitor.

Peko feels good grades are a must. In her spare time she enjoys shopping and hanging out with her friends.

She qualified for the for the 2011 Nastia Liukin Supergirl Cup when she swept the titles at the 2011 Fiesta Bowl. At the 2011 Lady Luck Invitational, Peko won the uneven bars and tied for first on vault. In 2008, Peko placed sixth all-around at the U.S. Classic and finished second on vault and floor at the Visa Championships, making the Junior National Team. She has competed at the Junior Olympics Nationals four times since 2006.

She has made a verbal commitment to the University of California – Los Angeles for 2012.