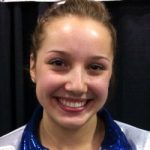 Charlie Owens’ biggest accomplishment was to come back after her injury. Charlie had a disease called osteochondritis dissecans (OCD) in both of her elbows, where the bone under the joint surface weakens and becomes injured. It then damages the blood vessels going to the bone. Without blood flow, a small section of bone dies.

Her doctors said that she wouldn’t be able to continue with gymnastics. But, she found a doctor that was able to fix her elbows.

Although she was injured, she still went to the gym and did conditioning for her lower body. She even practiced and competed on the floor without her arms. “I competed floor twice, but just at smaller meets. I was super excited to just be able to compete again.”

Charlie is a Level 10 gymnast at Charter Oak Gliders in Covina, Calif., where Beth and Stephen Rybacki are her coaches. “I like to push myself,” she says, “and I wanted to have a full-ride college scholarship.”

At first, Charlie wanted to attend Stanford, but then, changed her mind and verbally committed to Berkeley in 2010 right before Christmas. “Berkeley is a really good fit, and it feels like home for me.”

She qualified for the Nastia Liukin Cup at the Gliders Invitational, where she won vault, bars, floor and the all-around with a total score of 38.325 points.

She says that Nastia Liukin is an important role model for her, but her biggest role models have always been her parents, her grandmother and her coaches. “My grandmother is my biggest fan, she was at every single one of my gymnastics meets.”

In her free time, she loves to go shopping with her mother and grandmother. “We all have the same style and when you see us, you know that we’re related.”