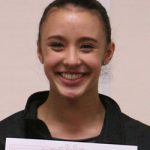 A few years ago, Kristen Nogaki had to make a hard decision: To continue with her gymnastics career or to focus on ice-skating.

At that time, she was very talented in both disciplines. “Ice-skating and gymnastics were at the same time, but I had the bigger passion for gymnastics,” she decided, “I still like to ice-skate but just for fun.”

The 15-year-old from Orange, Calif., spends 24 hours a week with practice at the Wildfire Gymnastics Club in Tustin, Calif.. This is her first season in Level 10, where she competes together with her older sister Katy, 17, also a Level 10. Her sister was the reason that Kristen started gymnastics at the age of 5, “My sister was taking gymnastics, so my mom signed me up, too,” she says.

Her favorite thing about gymnastics is to learn new skills, and she likes to challenge herself. To compete at Level 10, “It takes a lot of dedication and work and determination,” she says.

Although she is just a freshman at Villa Park High School, her goal is to sign a full-ride college scholarship and compete for a collegiate gymnastics team. She even has further ambitions – “I want to compete internationally.”

She qualified for the Nastia Liukin Cup at the San Diego Classic and is “very excited” to go to New York City, where she will be accompanied by her sister, mother and grandmother. “

Her coach Tom Wakeling is also excited for Kristen, “She really deserves it, after all the hard training.”

“Of course, I would really like to win the Nastia Liukin Cup, “Kristen says,” But I just want to go to New York City and do my best.”