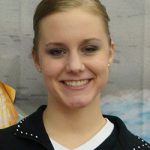 Jordan Naleway has been doing gymnastics for as long as she can remember. When she was just one year old, her mother, Lynn, took her to a Mom and Tot tumbling class. Since 1993, she has come long way.

Naleway, 18, qualified for Junior Olympic National Championships the past three years. Following a rough outing in 2008, she came back in 2009 to place eighth in the uneven bars. In 2010 she improved to sixth in bars. In 2009 she also placed first in bars at the State Championship Meet. She qualified for the Nastia Liukin Supergirl Cup by winning the all-around at the 2011 Wisconsin Dells Gymnastics Vacation Classic, where she also won the uneven bars and tied for third on vault.

“I always want to come back and do a better job than before,” said Naleway, whose nickname is JoJo. “I am motivated and determined to improve on my past performances.”

Naleway typically spends more than four hours training every day at Aerial Gymnastics Club. Her family’s support gives her the strength to keep competing. She has worked with her school guidance counselor at Vernon Hills High School, where she is a senior, to create a schedule that provides her with more time during the school day to get her work done and the flexibility to leave early.

She isn’t the only athlete in her family. Naleway has two younger brothers. Patrick, 16, is a wrestler, and Jack, 10, plays a bevy of sports, including football, baseball and basketball.

Naleway spends what little free time she has as a typical high school girl: hanging out with friends, going to movies, and just relaxing in her hometown of Vernon Hills, Illinois.

She is planning to attend the University of Illinois at Urbana-Champaign on an athletic scholarship.