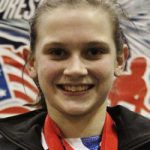 Kendal Moss is 14 years old and from Cornelius, N.C. She competes for Everest Gymnastics and trains under husband and wife coaches, Qi Han and Yiwen Chen.

Kendal started training about 10 years ago when her mother thought it would be good for her since she was so full of energy. She comes from an athletic family – while she competes in gymnastics, her brother plays soccer.

Every day, Kendal attends a public school and leaves early to train in the gym. Kendal likes to study math, and her teachers and classmates are very supportive of her schedule. She doesn’t see the training as work, but rather that she is just young and having fun.

Kendal has achieved a lot in her career, but most notably, she is proudest of qualifying for the Nastia Liukin Cup for two years in a row. Last year was her first time competing on podium. She found the experience motivating and thinks back to the Cup in order to continue pushing herself. She is excited to return this year with more experience and harder skills. She knows what she is capable of and looks forward to performing with confidence.

The uneven bars are Kendal’s favorite event because she finds it challenging, and she enjoys pushing harder everyday.

When she is not in the gym or at school, Kendal likes to read and watch movies. Looking into the future, Kendal hopes to earn a scholarship to a Division 1 gymnastics program. While competing, she also hopes to study business or sports medicine. 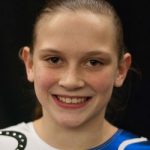 At 3 years old, a rambunctious little Moss was put in gymnastics by her parents to burn off some energy. It worked and then some.

Moss, now 13, took to the sport, climbing the latter through levels at a sprinter’s pace. She’s one of the youngest gymnasts to compete in the Nastia Liukin Cup but among the most talented.

Moss understands the magnitude of qualifying for the Cup even though she hasn’t entered high school yet.

“It feels really special because there’s only two people who get to go from each meet,” she said.

After winning floor at the Eastern Championship as a Level 9 last year, Moss tackled Level 10 along with a slew of teammates at her gym, Everest Gymnastics, in Cornelius, N.C. She defied expectations all year and it led her to the Cup.

“We’re very excited for her because we did not expect it because it’s her very first year as Level 10,” said Yiwen Chen, one of Moss’ coaches. “She was thinking she was not the strongest yet. She did really well. She pulled off the best she could.”

Just an eighth grader at Lake Norman Charter School in North Carolina, Moss has her eyes set on a college scholarship. Before she goes to college, Moss’ main goal is to become Elite. Moss challenges herself to add a new skill every month or so, she said. It took her two weeks to learn her latest, the side aerial on the beam.

“She has a lot of natural ability and potential,” Chen said.