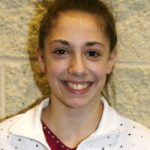 Her two older sisters, Jannelle and Brittany, are also gymnasts and have been an influential part of Manichiello’s life and career from the time she was born.

The youngest Manichiello got into gymnastics because she would spend time at the gym watching her sisters and it rubbed off on her.

“I guess when I was younger I was always looking up to them and saying how I wanted to be like them,” Hollie said. “Even if I was having a bad day they were always my motivation to keep going.

“When I looked over my shoulder, they were always there to tell me how I could do stuff better and to keep my head held high.”

Jannelle, 20, is a gymnast at the University of New Hampshire, and Brittany, 18, trains with Hollie at Orlando Metro Gymnastics. Each sister has helped Hollie in their each unique way.

Jannelle helps her little sister on the beam, especially with her flight series and her dismount. Brittany helps Hollie on the bars and the floor.

Brittany and Hollie have grown closer since they practice together five hours per day, five days per week.

“I think it’s awesome because I’m always needed in her life,” Brittany said. “She’s always the one who comes up to me. It makes me feel good because I know the answers to most of the stuff, especially in gymnastics.

“When she’s struggling a little bit, I’m always there to tell her different ways to do things and she says thank you very much and I love it.”