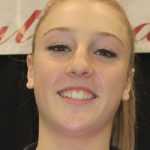 Athletes often have superstitions and rituals they have to perform before a competition. If Alex McMurtry doesn’t have chocolate chip muffins before a meet, there’s a good chance she won’t want to compete.

McMurtry, 15, trains at Richmond Olympiad Gymnastics in Richmond, Va. The Midlothian, Va., native says she started the superstition at Level 7 after the manager at her gym made her chocolate chip muffins when she was sick. McMurtry performed really well even though she wasn’t feeling well, and the routine of eating muffins before every meet was born.

“I’m really scared to not have them, so we always find them somewhere,” McMurtry said.

McMurtry had always aspired to advance to elite and join the national team, but after going to a few elite and national team camps, she decide to focus on Level 10 and collegiate competition. She trained with almost all the girls on the 2012 Olympic team and competed against Gabby Douglas for five years in Virginia.

“I was looking back at pictures. In some, Gabby Douglas would be on the first place podium and some where I would be,” McMurtry said. “It was interesting to see the different paths we had taken. Everyone would tell me, ‘That could’ve been you.’ That was the hardest part, but I’m happy with my decision because I really wanted to stay in public high school, stay with my family and take the Level 10 path.”

With her 16th birthday quickly approaching, McMurtry hopes she’ll have time to hang out with her friends and drive the green Land Rover she and her sister Addie share. She also enjoys wakeboarding and water skiing at her family’s lake house.

This will be McMurtry’s third trip to the Nastia Liukin cup. Last year she finished tied for second, but as long as she eats her chocolate chip muffins before the competition, there’s a chance she’ll land on top. 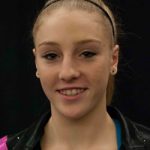 Alex McMurty is just 15 years old, but this will already be her second appearance at the Nastia Liukin Cup in New York – and her fifth season as a Level 10 gymnast.

“Last year, I ended up falling a couple of times,” Alex McMurtry says, “So, this year, I hope I will do better. I am not expecting to win, although, it would be nice.”

Alex qualified for the Nastia Liukin Cup at The Atlanta Crown Invitational in Duluth, Ga., although she lives with her family in Midlothian, Va. “I flew to the qualifying event together with my mom,” she said.

When Alex started gymnastics, she was just 3 years old. At the age of 10, she had already advanced to Level 10. She practices at Richmond Olympiad Gymnastics under Virginia’s 2010 Coaches of the Year Boris and Larissa Choutkin, both of whom are from Russia. She spends 24 hours a week at the gym, six days a week, from 4:30 to 8:30 p.m.

“It’s pretty much like a job,” she says and laughs.

And though she doesn’t get paid for it, the hard work is paying off for her.

Before competitions, Alex has a special ritual: “I always eat chocolate chip muffins in the morning.” Normally, her mother bakes them, “but, when we have a competition at some other place, we just buy them the day before.”

Her whole family will accompany her to New York to the Nastia Liukin Cup to support her: “My parents, my older sister Addie and my brother Mitchell will be there to cheer for me.”

But she will also have additional support: her gymnastics bag carries all the good luck cards that she has received from friends over the year. 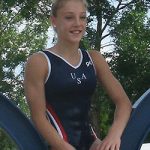 Alexandra McMurtry is the picture perfect example of hard work paying off. She qualified for the Junior Olympic National Championships three years in a row, from 2008-10. In just three years, she improved from her 35th-place finish at her first nationals to second in the all-around in 2010.

She also has a streak of taking the gold medal in all events for three years in a row at the Virginia state competition. The 14 year-old trains at Richmond (Va.) Olympiad, and this will be her sixth year with Virginia’s 2010 Coaches of the Year Boris and Larissa Choutkin.

McMurtry qualified for the Nastia Liukin Supergirl Cup at the Excalibur Cup in Virginia Beach, Va., where she won the all-around, balance beam and floor exercise and tied for second on vault. At the 2011 Hill’s Maryland Classic, she won the all-around, vault, balance beam and floor exercise titles and was second in the uneven bars.

She began gymnastics when she was two years old and had an energy level that was, as she claims, “all over the place.” Her favorite event is the floor exercise because it gives her the opportunity to pick her own music and openly express herself more than the other events do.

As with most eighth graders, McMurtry is excited about attending high school. For her the step has added appeal because it will be the first time she will attend public school. She loves science and wants to attend medical school one day. She believes her greatest weakness is the fear that comes with certain aspects of competition, but that her greatest strength is overcoming those fears and competing as hard as she can.