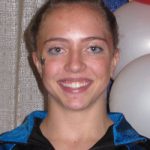 For years, Sydney McGlone couldn’t get herself to perform on the bars. There was a mental block that prohibited her from physically executing her routine. She couldn’t explain it. She didn’t like it. But all it took was a change of scenery help her move past it.

“I hated doing dismounts and felt like I couldn’t swing bars because I’m really small,” McGlone said. “I just had a crazy mental block but I’m glad it’s over with.”

The block, McGlone said, was a result of belonging to a gym in which she often practiced alone instead of in a team atmosphere. When her family moved from Reynoldsburg, Ohio, to Dublin, Ohio, both suburbs of Columbus that are separated by only 25 minutes, McGlone found a gym that suited her better. And it ended up making a world of difference.

“I learned a lot at my old gym,” she said. “but now that I am with a team, I have people to look up to and it has given me more confidence.”

It didn’t take McGlone long to realize the benefits of having teammates.

“I always thought I had an advantage working by myself, and then when I finally got the team concept I realize how much they mean to me. They are practically my family. We are always together. I can go to them for anything, even if it’s not gymnastics. It’s pretty great.”

At her new gym, McGlone performs with a newfound love of the sport. She was always known for her floor routine, she said, to the point where fans could watch her compete and instantly know who it was.

Now, her routine has evolved and she’s grown as a gymnast. And with that has come newfound fame.

“Now I’m an all around gymnast,” McGlone said. “Now people know who I am. People come up to me and ask me if I’m Sydney McGlone. It’s pretty crazy. It’s a little overwhelming, but it’s the good kind of overwhelming. It pushes me to be better because now I know people are looking out for me. I like it.”