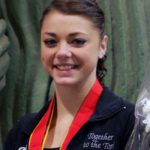 Caitlin Mann’s parents, Donna and Terry, got her involved in gymnastics when she was eight years old. The senior at Sahuaro High School now trains with the Tumbleweeds Gymnastics Club in Tucson, Ariz.

Mann, 18, trains for at least four hours a day. Outside of school, training, homework and sleep, she spends her free time with friends.

Her favorite event is the beam but she enjoys the floor exercise as well. Mann has been competing at Level 10 for three years.

“I don’t let pressure get to me,” Mann said. “If I know I need to hit a routine, I get it. Bad days or an off game are frustrating, but you have to push through it. Those are the times when you get better.”

Mann hopes to be an NCAA All-American and has committed to Boise State College.