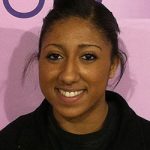 Arizona native Kassandra Lopez is a senior at Amphi High School in Tucson. She has been interested in gymnastics since her parents first enrolled her in classes in 2003. Lopez’s father, Antonio, was a soccer player and her mother, Jessica, participated in both track and volleyball in high school.

Lopez trains at Tumbleweeds Gymnastics in Tucson. She typically trains 4-5 hours per day. Keeping up with academics is difficult she says, but over time she’s gotten used to fitting it all in.

She feels her greatest strength is her work ethic. Focus and consistency will hopefully pay off in competitions. Although she has suffered the inevitable injuries here and there, she feels that mental perseverance helps her overcome any difficulties.

While gymnastics is a huge part of her life, Lopez still manages to find time for friends and family.

For Kay-Lo, as her friends call her, the best part of gymnastics is competing with her team, especially her best friend Caitlin Mann. One of her finest achievements was competing with the 2010 Junior Olympics Team and her ultimate goal is to compete at the Olympics.

Lopez plans to attend the University of Utah in the fall on an athletic scholarship.