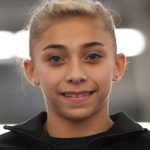 Ashton Locklear competes for Everest Gymnastics in Hamlet, N.C. She is 15 years old and has been in the gym since she was 2 years old.

Ashton is one of three girls in her family. Her sister started gymnastics when they were younger, and Ashton remembers watching from the sidelines, wanting badly to get involved. Eventually, her parents enrolled her in the gym, and she has been training every day since.

Right now, Ashton is homeschooled and enjoys studying algebra. She loves everything about the sport of gymnastics and, unlike most teenagers, enjoys the hard work and long hours of training because she likes to see the payoff. In fact, she sees herself owning her own gym one day because she wants to stay in the gymnastics world.

Qualifying for the Nastia Liukin Cup is one of the highlights of her career. She also made it to a National Team Camp, which she also pointed to as one of her proudest moments.

Ashton loves to compete in the uneven bars because she believes it to be her strongest events.

Outside of the gym, Ashton likes to draw and swim. She looks forward to the Cup, so she can put into use some new skills in order to work toward becoming elite.