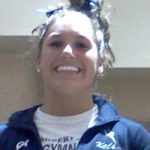 Kelsey Lawless, nicknamed Pumpkin, is an 18 year-old from Lyndhurst, Ohio. She has been involved in gymnastics since she was five, although the cartwheels began a couple of years earlier. A senior at Beaumont High School, Lawless trains at Elite Gymnastics Academy.

She considers her ability to perform under pressure the best part of competing. Lawless trains at least four hours per day. Keeping up with academics is tough but being a gymnast has kept her motivated. She has learned to stay organized and manage her time responsibly. Motivation and a strong work ethic are her greatest strengths.

Despite the demands of training and competition, Lawless finds time to teach gymnastics at Elite Academy and volunteers at both the Montfair Nursing Home and the Athletic Department at her old grade school.

Lawless is planning to go to Kent State University in the fall, where she hopes to compete.