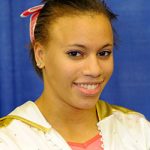 When Ashley Lambert came to World Class Gymnastics after learning the basics from a recreational program, coach and gym owner Tami Harrison knew it was going to take time to retool Lambert’s technique, which was rough.. Little did Harrison know that in a matter of a few short years, Lambert would be one of her most promising gymnasts.

“All the sudden she just bloomed,” Harrison said. “She became this strong, talented, young athlete.”

At just 15 years-old, Lambert is a Level 10 gymnast who has already accomplished many extraordinary things in her short career. She won the 2009 Level 10 State Championships and the 2009 Regional all-around title. She was second on vault, uneven bars and floor exercise, as well as placed ninth on vault and fifth on floor, at the 2009 Junior Olympic National Championships;. In the summer of 2009, she went on to compete at the elite level and took sixth on vault at the 2009 U.S. Classic and seventh on vault at the Visa Championships. She qualified for the Nastia Liukin Supergirl Cup at the 2011 Parkettes Invitational in late January.

Lambert came to World Class Gymnastics in 2006. She is coached by Harrison on balance beam and floor and Jon Angle on vault and uneven bars. Her favorite event is floor, and she is working hard on several skills she hopes to have ready by March.

One of Lambert’s goals is to a collegiate gymnastics scholarship, and her preference is the University of Georgia or the University of Alabama. She would like to major in culinary arts. On the way there, she would love a chance to be on the U.S. National Team. She will celebrate her 16th birthday on the day of the Nastia Liukin Supergirl Cup, and is hoping for a great birthday performance.