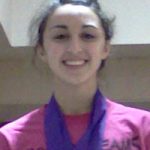 “I enjoy the thrill of competing and the friends I meet,” Jennie Laeng said of her involvement with gymnastics.

The 15-year-old from West Middlesex, Pa., is a part of the Olympic Dreams Gymnastics Club. Laeng’s mother, Joni, was a gymnast and competed during college at UNC-Greensboro. The rest of her family is athletic also: her father, Jack, played football; sister, Jacalyn, plays volleyball; and brother, Scotty, is a hockey player.

Laeng is a majorette for Kennedy Catholic High School, where she is a sophomore and has a 4.0 grade point average. Laeng is also a member of the Environmental Science Club and the Students Against Alcohol and Drugs group. She also trains about 4 hours a day, six days a week. Hard work and perseverance are a big part of her success.

“One of my biggest challenges has just been growing-up,” Laeng said. “In the past year or so, I’ve grown a lot, and dealing with the extra length to my body has been challenging.”

Laeng participated in both the 2009 and 2010 National Invitational Tournaments. She placed first in the all-around at the 2010 Hawaiian Pineapple Classic, where she also was first on the uneven bars and balance beam and second on vault and floor exercise.. At the 2011 Rock n’ Roll Classic, Laeng placed second in the all-around to advance to the Nastia Liukin Supergirl Cup.

Laeng’s long-term goal is to earn a college scholarship and continue to compete in gymnastics.