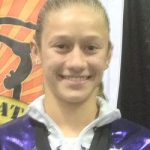 Canada, Argentina, Brazil, Poland and the United States: Alma Kuc has seen it all.

Kuc remembers growing up in Buenos Aires, Argentina. Specifically, she remembers being on a big basketball court in preschool with all her classmates clapping for her as she learned how to do cartwheels.

The cheers struck something inside Kuc, and she enrolled in a gymnastics class. She was the best in the class, and quickly moved to a real gym to begin her road to Level 10.

“It’s fun being able to impress people and them thinking that you’re the best thing ever,” Kuc said. “They’re really impressed about what you can do, and it’s really fun and rewarding for me to have people proud of me and excited for me to perform and do things they think are impossible.”

Kuc, 14, was born in Toronto, Canada, and moved to Argentina and Brazil before landing in the United States. Her extended family lives in Poland, and she takes trips every year to see them. Along the way she has learned Polish, Spanish English and some Portuguese.

Kuc now lives in Pacific Palisades, Calif., where she hopes will be her permanent residence. Kuc said it was hard moving around during her childhood to keep up with gymnastics, make friends and learn each coach’s training style, but with elite gymnastics and the Olympics as her goal, the determination it took only made her stronger. She also had help from her younger brother Thomas who is a Level 7 gymnast.

This is Kuc’s first year qualifying for the Nastia Liukin Cup, and while she is nervous to compete on podium and in front of cameras for the first time, she’s excited for the experience and the chance to meet Liukin.