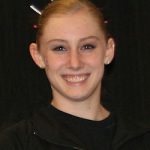 For Kathryn Kluz, gymnastics is all about commitment, focus and determination. And with those traits, she reached Level 10 gymnastics in the 8th grade, making her one of the youngest among her team’s practice squad.

For four years now, the 17-year-old has been practicing and competing at the highest level of the Junior Olympic program– and after her graduation from Walled Lake Northern High School this summer, she will look to have an impact as a member the gymnastics team at Auburn University. Kathryn signed a full-ride scholarship last November. “It was always my motivation to get a college scholarship,” she says.

Kathryn, called Kait, spends approximately 22 hours a week practicing at the Oakland Gymnastics Training Center in Walled Lake, Mich., with additional hours added on for competitions on weekends. Her favorite event is vault, adding, “I like the running and flipping, and it’s very powerful.”

Before competitions, she listens to music on her iPod to get focused. That focus has led her to the biggest accomplishments in her career: first place in vault four consecutive times, as well as the all-around title twice-in-a-row at the state meet. Last year, she earned second place in vault and seventh place in the all-around at the Junior Olympic National Championships in Long Beach, Calif.

She earned her trip to the Nastia Liukin Cup at the CGA Parents Club Coaches Spectacular in Covington, Ky., in mid-January by posting a score of 38.125 and winning the all-around title. Having qualified in 2011, this is the second time she has earned a trip to the final Nastia Liukin Cup Series event.

After finishing 25th in the all-around at last year’s final in Jacksonville, Fla., Kathryn hopes to redeem herself: “It would be nice to win the title.” 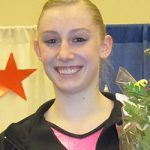 One would think that competing at more difficult levels would add pressure to a gymnast’s life. Kathryn Kluz, however, feels that competing in Level 10 actually lessens the pressure on her, because she is not worried about moving up to another level and can focus solely on polishing her skills. The 16 year-old trains at Oakland Gymnastics in Walled Lake, Mich., with coach Ruth Miller.

Miller remembers Kluz coming to classes when she was just a year-and-a- half years old. Since she began competing, Miller is proud of the hard work Kluz has done to improve her flexibility and gracefulness. She sees Kluz as a power gymnast and a wonderful team player, a quality that will serve her well at Auburn University, where she has verbally committed.

In her spare time, she enjoys attending her high school’s football games and watching hockey because she grew up watching her brothers play. Kluz is currently a junior at Walled Lake Northern High School. She is proud of her 3.95 G.P.A. and has already received her academic letter.

Competing in college is Kluz’s ultimate goal in gymnastics, though she is also considering the possibility of coaching one day. She has no idea why her parents put her in gymnastics, but she is certainly appreciative of the fact they did.