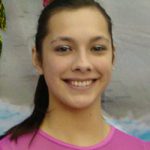 When Maile’ana Kanewa was a toddler, she used to love watching gymnastics on television. Her parents enjoyed it as well – until their daughter started trying to imitate the challenging and often dangerous skills the gymnasts were performing. They quickly enrolled her in formal classes at The Gymnastics Academy in Duluth, Minn., with coach Mark Waterhouse.

Kanewa is a 17 year-old high school junior who moved to Minnesota from Hawaii at a young age. She is very proud of her Hawaiian heritage and used to teach community hula dancing classes. In October, she verbally committed to the University of Oklahoma, receiving a full gymnastics scholarship.

Vault and floor are her favorite events because she sees them as the power events. She recently performed a one-and-a-half Yurchenko layout on vault for the first time, and throws a full-in on floor. Kanewa’s gymnastics inspired her little sister to also begin competing, and she is very proud of her younger sister’s achievements thus far.

Kanewa feels that her greatest strength is her strong work ethic. Qualifying for the Nastia Liukin Supergirl Cup was one of her greatest goals this year, and she is very excited to meet Nastia Liukin in March. She has never competed on podium before,and is very honored to have qualified for the event.