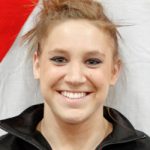 This year when Charity Jones makes her way to the DCU Center in Worcester, Mass., she’ll have one goal in mind – to walk away as the first-ever consecutive, two-time champion of the Nastia Liukin Cup.

Jones, 17, from Miami, Okla., began gymnastics when she was just 3 years old after watching her older sister Paige in gymnastics classes. She hails from Dynamo Gymnastics in Oklahoma City and is in her last year competing as a Level 10 gymnast.

“I definitely want to win the Nastia Cup again,” Jones said. “I think that would be pretty cool to be the first to win it back-to-back, and I would like to win Nationals again because it’s my last year. To go out with winning it three years in a row would be cool.”

Jones, often called “Biscuits” by her coach and teammates because she ate biscuits and gravy before working out one day, made the move to Dynamo in 2011 to train under coach Dennis Harrison. Since the shift, she has won the Women’s Junior Olympic Level 10 National Championships for the past two years, as well as the Nastia Liukin Cup in 2012.

The national champion will continue her gymnastics career at the University of Oklahoma next year where she hopes to compete as an all-arounder. She spends nearly seven hours each weekday training and four-and-a-half hours on weekends.

Before an event, Jones can be found either going over her routine with Harrison or standing alone to focus and visualize her performance. Her favorite events are beam and floor. She says she has always preferred beam and enjoys floor because it’s fun to show off her dance moves.

“You can be powerful and not hold anything back,” Jones said.

Jones will have to bring that power to the DCU on March 1 when she hopes to defend her title.

Biscuits is heading to the Big Apple.

No, Charity Jones’ real name isn’t Biscuits, just a nickname given to her years ago and has stuck ever since.

And yes, Jones has never been to New York City. There, she’ll compete in the Nastia Liukin Cup.

Topping Jones’ long list of to-dos in New York is the Statue of Liberty and the 9/11 Memorial at the site of World Trade Center. Other than that, the 17-year-old will see New York as it comes.

“This is going to be very exciting for me,” Jones said. I’m going to “just walk around and see anything I guess.”

Big on experiencing life, Jones wanted to compete in the Nastia Liukin Cup and meet the Olympian namesake since she found out about the meet.

“I just think it’s so cool to be in a meet with the Olympic champion,” Jones said. “Ever since I saw it I wanted to be a part of it.

“I thought it was a cool experience and then, that I finally made it, it’s pretty cool that I get to meet all these people and meet Nastia, and get to experience the whole atmosphere of everything.”

But Jones will still be called Biscuits.

The nickname came when she started practicing at her first gym. Jones was small compared to her teammates and one day her coach asked what Jones had for breakfast, which happened to be biscuits and gravy. When Jones moved to her current gym, Dynamo Gymnastics, the nickname came too, but her new coach dropped the gravy.

“It stuck with me,” Jones said. “She laughed and said she’d call me Biscuits.”