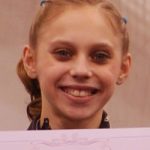 Sydney Johnson-Scharpf is from Groveland, Fla., where she trains at her mom’s gym. Global Gymnastics was founded by Olympian, Brandy Johnson-Scharpf, who competed in the 1988 Olympic Games in Seoul, Korea. Since retiring as a competitive gymnast, Brandy has been coaching aspiring athletes, including her daughter, Sydney.

Sydney has practically grown up in a gym. She had kidney surgery as a 3-month old, and had to go to work with her mother every day. Twelve years later, Sydney has dreams of her own. She wants to follow in her mother’s footsteps and become an Olympic gymnast, too. Later this year, she will attend an elite qualifier that would help put her on the path to fulfilling that dream.

Sydney goes to a private school, but heads out early in the day to get as much time in the gym as she can. When she was little, she used to take dance classes which is why she loves performing in the floor exercise where she gets to dance and tumble. Floor may be her favorite event, but she is proudest of her 9.9 on the beam at Regionals.

Sydney likes to push herself, hoping to improve the most in her bars.

Outside of the gym, Sydney loves to learn about robotics, and hopes to study robotics engineering in college. She also describes herself as crafty, and loves to look for things to make on Pinterest.