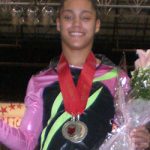 “Ali” Jackson started gymnastics later than most girls. When she was six, a friend convinced her to try it out and she has been hooked ever since.

Jackson, 15, hails from Belton, Mo., where she trains at Xtreme Gymnastics. Her brother, Trevor, runs track and cross country.

Jackson trains after school from 3 p.m. until 7 p.m. She puts a priority on her school work and takes time out of her day to make sure it get accomplished. In her spare time, she enjoys reading.

Jackson’s favorite event is the floor exercise, but admits that vault is usually where she earns her top scores. She has been competing at Level 10 for nearly two years.

“I have great focus and don’t easily get distracted,” Jackson said. “It’s hard to overcome fear at a meet. I sometimes get nervous right before a competition but I always push past it.”

While she has yet to look at colleges, Jackson is planning on getting an athletic scholarship and will start looking soon.