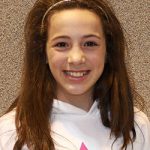 Amelia Hundley, who started doing gymnastics when she was four years old, comes from a family full of gymnasts.

Her mother, Sharon, was a gymnast when she was in college. Two of her brothers did gymnastics when they were younger but have moved on to other sports. Hundley’s family owns a dance studio in Hamilton, Ohio, her hometown. She used to dance regularly at the studio before focusing on gymnastics.

“We love each other,” Hundley said. “We always think of each other as teammates and it is great to go to this event (Nastia Liukin Supergirl Cup) together.”

Hundley and Williams train at the Cincinnati Gymnastics Academy, where Hundley trains five hours a day. At the 2011 IGI Chicago-Style Meet Hundley took top honors for the balance beam, was second in the all-around and tied for second on the floor.

Hundley attributes her success to the support of her parents and coaches. She is home-schooled and is in seventh grade.

Hundley has not yet started looking at colleges, but is would like to make the national team and earn a collegiate gymnastics scholarship.