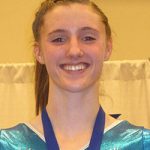 Like so many other gymnasts, Mary Jane Horth started gymnastics at a young age when her mother, Marilyn, took her to a Mom & Tot tumbling class when she was three. Much like the rest of her family, she was a natural athlete.

Horth’s mother played volleyball in college, and her father, David, was a skier at Stanford. She has four brothers, three of whom play soccer and the other plays volleyball. Her oldest brother is now a professional soccer player. And, brother Tim, one of the soccer players, is her twin.

Horth hails from Akron, Ohio, and trains at Gym World. Friends and family call her “MJ.”

Her favorite event is the floor exercise; however the uneven bars is a close second, where she typically scores the highest. She relishes the challenge that competing brings her every day.

“I would say that bars is my greatest strength,” said Horth. “My biggest challenge has been my consistency on beam. It’s something I really have to focus on.”

Horth’s schedule begins with school from 8 a.m.-3 p.m. and then to the gym for four hours. When she gets home, she works hard to maintain a 4.4 GPA in her honors and AP level classes.

Her goal is a college scholarship. Horth is currently being recruited by the College of William & Mary, Cornell University and the University of North Carolina.