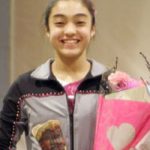 When Felicia Hano was just 3-years-old, she saw a gymnastics competition on TV, and she’s been at the gym ever since.

She trains for seven-and-a-half hours a day, aspiring to make the jump to elite and join the U.S. National Team one day. Like the U.S. National Team, Hano likes to listen to Dr. Alison Arnold, known as a fear liberator, before she competes. She says it helps her focus and have more control of herself.

The 2012 Olympics served as a major influence for Hano, and she aspires to be like gold medalist Aly Raisman because of her power and gracefulness.

“It was really motivating to go back in the gym and just realize what my goals are,” Hano said.

Hano, 14, is a native of San Gabriel, Calif. Her most unforgettable performance was at the 2012 Women’s Junior Olympic Level 10 National Championships where she placed first in the all-around for West Coast Elite Gymnastics.

“That was honestly one of the best days of my life,” Hano said. “I was a bit surprised because I knew there was going to be a lot of great girls there. It felt really good to come on top.”

Hano qualified for the Nastia Liukin Cup last year, and she is excited for another chance to perform better. Now that she has the experience of competing on podium and in front of cameras under her belt, she says her nerves won’t get in the way this year.

Outside of gymnastics, she likes to read and hang out with friends. Currently, Hano and her friends are “obsessed” with Pitch Perfect. She also enjoys studying U.S. History.

When it comes to tumbling, Felicia Hano has it covered.

Nearly as long as she’s been a gymnast, Hano has also been a tumbler.

In 2009, Hano competed in the Trampoline and Tumbling World Championships in St. Petersburg, Russia, and this year, the 13-year-old from San Gabriel relied on her background as a world-class tumbler to qualify for the Nastia Liukin Cup.

“I really love tumbling so I try to use some of those skills on floor and vault,” she said. “In trampoline and tumbling the floor is a lot bouncier than in the artistic floor.”

Hano has long looked up to Nastia Liukin, calling Liukin one of her role models.

But Hano will lean on her experience in Russia when she competes in Madison Square Garden. Since competing on an international stage, Hano said she’s become more headstrong when she’s competing.

“There are a lot of great girls but I learned how to just tone everybody out and concentrate on what I am doing and make everything perfect,” Hano said. “It was awesome. It was a bit nerve racking but it was a lot of fun.”

Hano says that being a tumbler has helped Hano become a better artistic gymnast. Some of the same tactics on the trampoline have transferred over to the various apparatuses.

“Tumbling is one of my stronger points so it makes some things a lot easier to do,” Hano said.

Hano won’t unveil a new routine in New York, instead choosing to improve on the skills she’s been successful with. But she’ll still rely on her tumbling background to put on a show in the Big Apple.

“They’re pretty different,” Hano said, “but similar in some ways.”