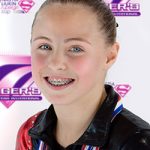 Kaitlyn Hall is one of the youngest among the qualifiers for the Nastia Liukin Supergirl Cup, but she does not let that intimidate her going into competition. Just shy of 13 years-old, Hall is well-known among her peers to be a determined perfectionist.

With her many athletic talents, KGDC Twisters is happy Hall decided to pursue her passion for gymnastics. She also participates in diving, and can do a double front in the air. Her mother, Laura, wanted her to follow in her footsteps and be an ice skater. Fortunately, all Hall wanted to do was gymnastics.

Jennifer Green, one of her coaches at KGDC Twisters, believes that though Hall’s perfectionism is one of her greatest strengths, it can also be a challenge at times. Hall has a great competitive nature, and her drive can cause her to be a bit too hard on herself. However, Green also credits Hall with being a very positive person and great teammate who will go out of her way for her friends.

Hall’s favorite event is the floor exercise because of her love of performing, and she won that event in the IGI Chicago Style in 2010. In that same year, she was Level Nine Regional vault champion and finished fourth in the all-around. She qualified for the Nastia LiukinSupergirl Cup at the Folger’s New Year’s Invitational in Wichita, Kan.

Hall is in seventh grade and loves English more than her other classes. She loves to read, swim and dive in her free time, and she hopes to compete on the University of Florida gymnastics team when it comes time for her to go to college.