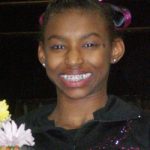 When Nia Dennis was 6 years old, she always played around on the monkey bars. That’s when her parents decided to sign her up for gymnastics. Now, seven years later, Nia is a Level 10 gymnast and practices five days a week at Buckeye Gymnastics under coach Kittia Carpenter.

Nia lives in New Albany, Ohio, with her parents Casey and Deetra and her sister Mya. She is in seventh grade, and her favorite school subject is social studies.

Her parents will accompany her to the Nastia Liukin Cup in New York City for which she qualified to at the Buckeye Classic. In the junior division, she won all four events, vault, bars, beam and floor, plus the all-around title with a total score of 38.775 points.

Nia says that she would like to win the Nastia Liukin Cup, “but first of all, I want to do my best.”

As her future goals in gymnastics, Nia lists making the Visa Championships, as well as the national team and earning a full-ride college scholarship. She also would like to eventually compete in the Olympic Games.

When Nia is not in the gym, she likes to cook, especially breakfast food like pancakes and waffles, which she says are her favorite foods.