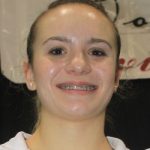 Rachel Daum, who will be 18 on Feb. 16, is a high school senior from Katy, Texas. She is a member of Star Gymnastics Training Center in Houston where she trains with Dan and Ashly Baker. Ashly credits Rachel as being a great team member and a very driven, hard-working athlete.

According to her coaches, Rachel is dominant in vault and floor, the two events she won at Level 10 Nationals two years ago. She has also worked hard on improving her performance on the uneven bars. Rachel enjoys her routine on the floor exercise because she loves to dance.

Rachel and her twin brother are both athletes. When she was 5 years old, their mother wanted them to be involved in a bunch of sports to see which one they liked. Rachel ended up falling in love with gymnastics.

This is Rachel’s first Nastia Liukin Cup, and Star Gymnastics’ first, as well. However, Rachel has accomplished a ton in her ten-year career. In 2010, she was a Junior Olympic National Qualifier, and she won two events at Nationals in 2011, and finished third in the all-around in 2012.

Next year, Rachel has committed to Stanford University, where she received a scholarship to compete for their gymnastics team. This, Rachel says, is her biggest accomplishment.