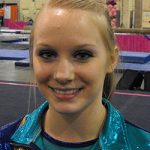 It is safe to say that genetics had a large influence on Georgia Dabritz’s passion for gymnastics. Her parents were both involved in the sport, as were her older brother and sister, so it was no surprise when Ace Gymnastics found yet another star in Georgia.

The 18-year-old qualified for the Nastia Liukin Supergirl Cup at the Flip Fest Invitational in Knoxville, Tenn. this past January. Her favorite events are the uneven bars and floor exercise, and she can perform a Comaneci release on bars. Dabritz spends about 27 hours a week in the gym with coach Laura Tebo, who has been with her since day one.

Ace Gymnastics is a training center located in Ipswitch, Mass. Dabritz was three years old when she began her training there, and soon developed into a promising young gymnast. Over time, Tebo knew she had a special athlete on her hands.

“She definitely never gives up,” Tebo said. “She will fight through.”

Dabritz is a senior in high school who loves to shop – especially at her favorite store, Forever 21. She enjoys school and performs well in her academics, but if you ask her if she would rather to be at school or in the gym, she won’t hesitate to let you know that gymnastics is where her heart is.