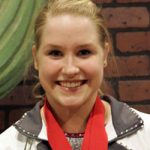 For four years when she was younger, Briley Casanova was a busy child.

She was a gymnast and then her mother, Zelda, would shuttle her to dance classes. Although that schedule didn’t last very long, Briley is still reaping the benefits of a dance background as she qualified for the Nastia Liukin Cup.

“It provided a place where it could help me perfect my form on the dance and the leaps,” Casanova said. “It was an arena where I could be myself. It wasn’t as hard core as gymnastics.

“I was young, so we didn’t have many crazy skills and hard things to do. It was just another fun thing at the time. It kept my occupied and focused. I think the big thing was it kept me focused. I stayed determined. It was a skill that really helped me do well in gymnastics.”

It also led Casanova, a Dallas native, to the University of Michigan, where she verbally committed to join their gymnastics team in 2013, when she graduates from high school.

Besides meshing with the coaches, team and the support staff, it was a change of scenery that drove Casanova’s decision to leave the comforts of Texas heat for the chills of Michigan’s winters.

“I know the weather isn’t the greatest there, you just got to be tough, I guess,” Casanova said. “I’ve lived in Dallas, Texas, my whole life, and I wanted a new experience. I haven’t had to deal with cold weather or change. It was also to try something new.”