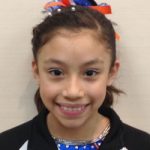 Miranda Cabada from Fontana, Calif., competes for Winner’s Academy of Gymnastics. Miranda is 12 years old and is in the seventh grade. She started gymnastics seven years ago when her parents thought it would be a good idea to get her involved. Unlike many other gymnasts, her parents were not gymnasts themselves, and Miranda is the only family member that competes in the sport.

The Cabada family also includes Miranda’s younger brother, who plays baseball, and her older sister, who competes in swimming.

After spending most of the day at school, where she likes to study math, Miranda heads to the gym where she trains for about five hours.

She enjoys competing in the floor exercise because she can have fun doing it. Heading into 2013, Miranda set the goal of qualifying for the Nastia Liukin Cup, and she reached that goal, making it the proudest moment in her career so far. She has set another goal for the Cup, which is to place in the top three in the all-around.

Outside of the gym and while she isn’t in school, Miranda likes to bake. She said she likes to make cakes and cupcakes the most.

Miranda enjoys gymnastics because she likes having the ability to flip and tumble, which many people cannot do. She admits she has had fear before trying something new, but she likes the challenge.