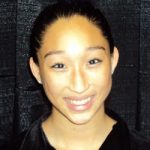 Every floor exercise is something special for Wynter Childers.

“I am doing my own choreography,” the 14-year-old from Spearfish, S.D., says, “It normally takes one to two hours to create them.”

This season, she is doing her routine to the soundtrack from The Pirates of the Caribbean.

Floor is her favorite event, “I really like to dance and tumble.” But she says that bars is the most challenging event for her, as “I’m just not very flexible in my shoulders.”

For Wynter, who trains at Spearfish Gymnastics with coaches Phil and Chris Summers, the biggest accomplishments in her gymnastics career were to compete at the Junior Olympic National Championships in Dallas two years ago, as well as to qualify to the Nastia Liukin Cup this year.

She earned a spot to compete in the finals at Madison Square Garden at the Lady Luck Invitational in Las Vegas, earning first place all-around in the junior division with a total score of 37.475 points. Wynter is really excited for the final: “My whole family is going with me to New York City, and we are staying the whole weekend – from Thursday until Tuesday.”

Although she is not very superstitious, right before the competition begins, she crosses her fingers as the national anthem plays. And the night before, she rehearses her routines in her head.

She has already set goals for her gymnastics career: “I want to qualify for the Visa Championships in St. Louis in June, as well as for the World Championships next year.”

Wynter also hopes to earn a full-ride scholarship at her favorite college: The University of Alabama.

“Alabama’s gymnastics team is really good, and I like the location because I like it warm,” Wynter says. 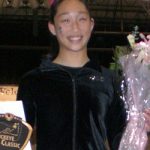 Lisa Burt loves scuba diving and seeing all the interesting fish. She also plays the flute and enjoys going on adventures, but her main focus is gymnastics. At age 16, the Port Orange, Florida-native is a member of the ACE Gymnastics Club.

An honors and AP student, Burt would like to pursue a career in optometry or sports medicine. Her overall GPA is a 4.15. Due to spending every evening at the gym, she says much of her homework is done in the car while traveling to and from practices and meets.

Burt began tumbling around her house as a toddler and her parents enrolled her in a gymnastics class. Her favorite event is the uneven bars because she loves the feeling of flying. Her best move is a double lay dismount. She would like to someday compete at the college level, hopefully in the Big Ten.

“I always want to learn new skills and get better,” Burt said. “It’s hard to balance school, friends and gymnastics but I think I do a pretty good job.”