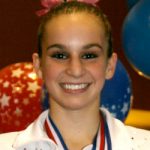 What a different a year makes.

Last February, Emily Brauckmuller tore two ligaments in her right ankle during a meet in Virginia Beach, Va., This year, with one of the two ligaments healed, she’s preparing to compete in the Nastia Liukin Cup.

She might be performing at the level she was pre-injury but Brauckmuller is scheduled to have surgery on the other ligament in May.

“I never thought my ankle would be the same after that,” she said. “After phsyical therapy and doing stem, it felt more strong than it was before. I just want to go out there and do my best and hopefully my best will get me on top.”

Brauckmuller hurt her ankle doing a front pass last February. A month later, unable to compete on any other apparatuses, Braukmuller competed solely on the bars. It wasn’t until four months later, after physical therapy, she was back on the floor doing her routine.

The most frustrating part of her injury wasn’t just watching her teammates compete while she couldn’t. It was trying to do different things her ankle simply wouldn’t let her do, and she watched her conditioning and tumbling suffer.

“As a gymnast you just want to get back into it as fast as you can and sometimes your body just wont let you no matter how hard you try,” she said.

But there was a point recently when Brauckmuller realized she’s back.

“I had that probably my first meet of the season, which was in January,” she said. “I felt really confident about myself and I knew I could do it after my first meet.”