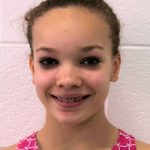 While most 12-year-olds are worrying about who’s taking them to the mall or who their latest crush is, Lauren Bancroft is more concerned about practice.

She already spends about 25 hours per week in the gym, learning from USA Gymnastics National Team member and World Champion Jordyn Wieber, who also trains at Gedderts’ Twistars USA in Lansing, Mich., as well as fine tuning a routine that helped qualify Bancroft for the Nastia Liukin Cup.

“All the hard work in the gym paid off,” Bancroft said.

She might be short on words, but Bancroft has established herself as one of the fiercest competitors in her age division.

“She’s a great little competitor,” said her coach, John Geddert. “She loves to compete. If she worked out as she hard as she competed, she’d be a lot further along.

“If she gets motivated by the crowd, she’s never seen anything like what she’ll see at the Nastia Liukin Cup. This will be a great experience for her; the podium and the bigger crowd. She’s a great competitor. She’s a gamer. When the game’s on she’ll put her best foot forward.”

Geddert said Bancroft is one of the most physically gifted athletes he’s ever coached. It’s evident in her vault.

For most 12-year-olds, the vault is one the toughest apparatuses to conquer. But Bancroft hasn’t flinched.