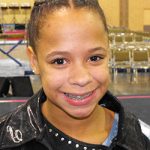 Katie Bailey didn’t start gymnastics as early as most girls. She was five years old when she first stepped onto a mat.

Bailey, 15, is a home-schooled high school sophomore, which allows her a level of flexibility with her time that many gymnasts don’t have. She trains at High Point Gymnastics Academy in her hometown of Kernerville, N.C.

Bailey has set an example for the other girls at her club.

“I think I’m a good leader,” Bailey said, who was a member of the 2005-06 National Talent Opportunity Program (TOPs) Team. “At least, that’s what I’ve been told. I like having the younger girls look up to me and being able to help them get better.”

Bailey’s short-term goals are to compete at a high level for four years in college. She is currently being recruited by the Universities of Georgia, Florida and Alabama.