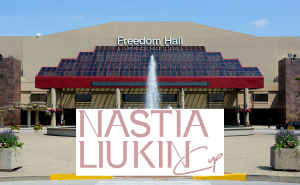 LOUISVILLE, Ky. (December 13, 2022) – USA Gymnastics’ annual Winter Cup, along with the accompanying Nastia Liukin Cup and Elite Team Cup, will be held February 24-26 at Louisville’s Freedom Hall located within the Kentucky Exposition Center. The field in 2023 will once again feature men’s and women’s junior and senior gymnasts, including past Olympians, World medalists and Olympic hopefuls.

“Winter Cup is the first opportunity of the season for fans to watch many of the nation’s top artistic gymnasts compete on the same floor,” said USA Gymnastics Chief Programs Officer Stefanie Korepin. “We’re thrilled that this year’s event will continue to welcome men’s and women’s elite divisions in addition to featuring some of the best up-and-coming talent in the same high-stakes, high-energy environment. Fans in Louisville are in for three days of incredible gymnastics.”

Winter Cup is an important stop on the road to the 2024 Paris Olympic Games, as performances will impact selection for multiple international assignments in 2023. For juniors, the competition will also help determine who will represent the U.S. at the Artistic Gymnastics Junior World Championships March 29-April 2 in Antalya, Turkey.

Senior men’s Day 1, which will determine the all-around champion, will lead off competition Friday, February 24 followed by the 14th-annual Nastia Liukin Cup – a national event featuring junior and senior women’s Level 10 gymnasts who qualify through a series of invitationals – in the evening. Junior men will get their first taste of action Saturday evening in a regional team shootout known as the Elite Team Cup. Sunday evening, junior and senior men will share the floor with apparatus titles up for grabs in both divisions. Senior women will take the stage Saturday afternoon, and junior women will kick off Sunday’s competition slate.

“Louisville looks forward to hosting USA Gymnastics’ Winter Cup and welcoming the athletes, their families, officials and spectators to our community,” said Greg Fante, Vice President of Sports Development of the Louisville Sports Commission. “This event enables us to grow our relationship with USA Gymnastics and is a great opportunity for Louisvillians to support Olympic-caliber athletes in one of gymnastics’ most exciting and popular disciplines.”

Louisville previously hosted the U.S. Classic in 2019. This is the first time USA Gymnastics’ season will run through Freedom Hall.

“Kentucky Venues is excited to host the Winter Cup at the Kentucky Exposition Center in 2023. This February, elite gymnasts will compete in Freedom Hall where legends are made and celebrated,” said David S. Beck, President and CEO of Kentucky Venues.

Tickets for the 2023 Winter Cup, Elite Team Cup and Nastia Liukin Cup will go on sale in the coming weeks. Please register here if you would like to be notified when they become available. More information, including past results, is available at WinterCup.com.