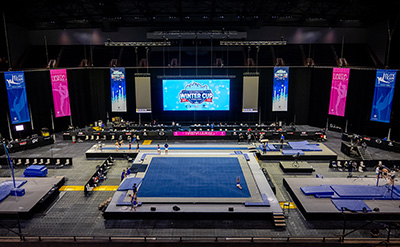 FRISCO, Texas, February 24, 2022 – The fields are set for the 2022 Elite Team Cup Presented by TURN and 13th-annual Nastia Liukin Cup, which are being held this weekend at Ford Center at The Star in Frisco, Texas, in conjunction with the 2022 Winter Cup Presented by OZONE and TURN. Tickets for these events, which feature some of the top up-and-coming gymnasts in the country, are on sale now.

Nastia Liukin Cup
The Nastia Liukin Cup is slated to lead off a full weekend of top-tier national competition Friday at 2:30 p.m. ET. The event will air live on Olympic Channel: Home of Team USA and will feature 20 junior and 20 senior USA Gymnastics Women’s Development Program athletes who qualified to compete through their performances at a series of invitationals held across the U.S. over the last eight weeks.

The event was founded in 2010 by 2008 Olympic all-around champion and 14-time Olympic and World medalist Nastia Liukin, and participating gymnasts have the opportunity to connect with Liukin during the pre-event festivities. Numerous current and former U.S. Senior National Team members competed in the Nastia Liukin Cup as Level 10 gymnasts, including Olympic medalists Gabby Douglas (2010) and MyKayla Skinner (2010, 2011) and 2017 World all-around champion Morgan Hurd (2014).

Elite Team Cup
The annual Elite Team Cup Presented by TURN – a team competition that pits regional teams of six men’s Junior Elite gymnasts against one another on the national stage – will kick off Saturday at 6:30 p.m. ET. Reigning champions Region 3 will look to continue a dominant streak that has seen them take top honors in each of the last six years, while Region 1, which has secured the runner up position in three of the last four competitions, will try to play the role of spoiler. After finishing second in 2020 and missing the competition in 2021 due to the ongoing pandemic, gymnasts from Region 6 hope to re-establish themselves as title contenders, and perennial powerhouse, Region 8, will look to improve on third-place finishes in 2019 and 2021.

The Winter Cup junior all-around champion will be determined by individual scores Saturday. Meanwhile, top performers on each apparatus will earn the opportunity to compete for junior event titles Sunday alongside their Winter Cup senior division counterparts.

Qualified but unable to compete due to injury