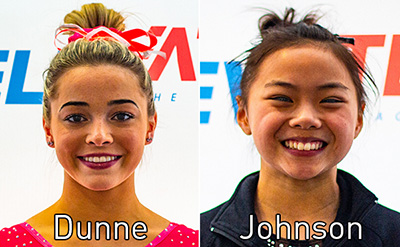 INDIANAPOLIS, Feb. 24, 2020 – The Elevate the Stage meet, which took place in Toledo, Ohio over the weekend, was the eighth and final round of invitationals of the 2020 Nastia Liukin Cup Series.

Olivia Dunne of Hillsdale, N.J./ENA Paramus and Zoe Johnson of Durham, N.C./Bull City qualified for the final two spots of the 2020 Nastia Liukin Cup, taking place March 6 at Fiserv Forum in Milwaukee, Wis. 2020 is the 11th annual edition of the Cup, which was started in 2010 by 2008 Olympic all-around gold-medalist Nastia Liukin.

Tickets for the American Cup and Nastia Liukin Cup are on sale now. Tickets may be purchased at the Fiserv Forum Ticket Office, FiservForum.com or Ticketmaster.com. Discounted tickets are available through local gymnastics clubs that are participating in the club ticket sales program. For information on club sales or group tickets, call 414.227.2875.