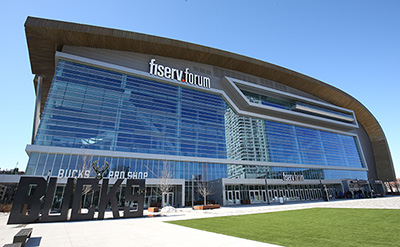 MILWAUKEE, Wis., Nov. 15, 2019 – All-session tickets are on sale now for the 2020 American Cup, the USA’s most prestigious international gymnastics competition that will make its first visit to Milwaukee, Wis., on Saturday, March 7. Held at the world-class Fiserv Forum, the American Cup is the first of the four all-around events included in the International Gymnastics Federation’s World Cup Series, which is part of Olympic qualifying for the 2020 Olympic Games in Tokyo, Japan. This year’s American Cup has two sessions, the women at 11 a.m. CT and the men at 3:30 p.m. CT. The 2020 Nastia Liukin Cup, which showcases some of the country’s top Junior Olympic female gymnasts, is slated for Friday, March 6, at 7 p.m. CT.

“Fiserv Forum is a wonderful stage for the 2020 American Cup, which can be viewed as the start of the journey for Team USA’s gymnasts to Tokyo,” said Li Li Leung, president and CEO of USA Gymnastics. “Because this year’s American Cup is part of qualifying for the Games, we anticipate having one of the strongest fields in the event’s history. We hope Olympic, general sports and gymnastics fans alike will come to Fiserv Forum to support the USA’s top gymnasts when they take on the world on March 7. The Nastia Liukin Cup, held the night before, is a special event for 36 Junior Olympic gymnasts and is a chance to see some of the country’s rising stars.”

“Milwaukee has always had a strong connection to USA Gymnastics,” said Raj Saha, Fiserv Forum general manager. “We are thrilled to partner with USA Gymnastics in hosting the American Cup and the Nastia Liukin Cup. This is a great opportunity to see many of the gymnasts who may be participating in the 2020 Tokyo Games later on in the summer.”

“VISIT Milwaukee is delighted to team up with Fiserv Forum and USA Gymnastics to welcome the prestigious 2020 American Cup to our city,” said Marissa Werner, senior sports and entertainment sales manager for VISIT Milwaukee. “We are excited to showcase our city to these talented athletes and their audience from around the world.”

Although this is the event’s first visit to Milwaukee, two Milwaukee-area gymnasts have won American Cup titles. In 2004, Paul Hamm, who grew up in Waukesha, Wis., won the all-around and went on to claim the 2004 Olympic all-around gold. In 2005, the American Cup awarded titles for each individual event for men and women. Chellsie Memmel, who now lives in Dousman, Wis., won the uneven bars title and went on to become the 2005 World all-around champion, as well as earn the 2008 Olympic team silver medal.

All-session ticket packages range in price from $77-$179, plus applicable fees, and prices vary depending on the seat location. The all-session ticket includes both American Cup sessions on March 7 and the Nastia Liukin Cup on March 6. Tickets may be purchased at the Fiserv Forum Ticket Office, FiservForum.com or Ticketmaster.com. Discounted tickets are available through local gymnastics clubs that are participating in the club ticket sales program. For information on club sales or group tickets, call 414.227.2875.

As part of the Olympic qualification process, the 2020 American Cup’s format has changed and will have two all-around sessions, with 13 women competing at 11 a.m. CT and 13 men at 3:30 p.m. CT. Invitations to compete are based on performances at the 2019 World Gymnastics Championships. The competition schedule is subject to change.