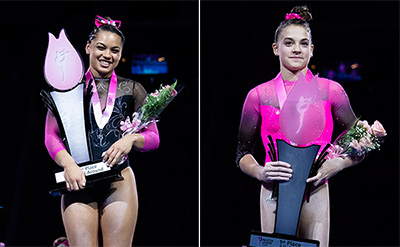 GREENSBORO, N.C., March 1, 2019 – Makarri Doggette of Pickerington, Ohio/Buckeye Gymnastics, and Gabrielle Gladieux of Greensboro, N.C./High Point Gymnastics, won the senior and junior all-around titles, respectively, at the 2019 Nastia Liukin Cup, held at the Greater Greensboro Coliseum Complex. The Triple Cup gymnastics weekend continues with the American Cup at 11:30 a.m. ET on Saturday, March 2, and wraps up that night with the Elite Team Cup at 6 p.m. ET.

The sixth time was the charm for Doggette, who won the senior title with a 38.975, that included the highest scores for vault, uneven bars and balance beam. Jillian Hoffman of Murrieta, Calif./SCEGA, took second at 38.875, and Kiya Johnson of Coppell, Texas/Texas Dreams, landed in third at 38.750.

In the junior division, Gladieux, who has competed in one previous Nastia Liukin Cup, garnered the title with her all-around score of 38.425. Madison Ulrich of Fort Mill, S.C./Southeastern Gymnastics Center, was on Gladieux’s heels at 38.150. Ava Piedrahita of Gaithersburg, Md./Hill’s Gymnastics, nabbed third with a 37.775.

The event scores for the senior medalists are below.

The top three juniors’ event scores are below.