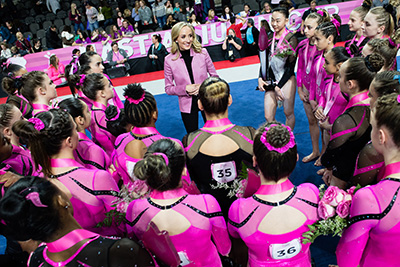 Nastia Liukin was a newly minted Olympic champion zipping from one engagement to the next in 2009 when the idea of creating a competition for promising younger gymnasts first took root in her mind.

Having her own meet was not something Liukin had imagined when, as a promising young gymnast herself, she created vision boards outlining her hopes for the future. But when the long-held dream of winning the Olympic all-around title came true in 2008, Liukin found that the gold medal came with a platform to realize her own projects.

The more she considered it, the more a competition in her name, something she could put her personal stamp on, ticked the boxes of things she wanted to accomplish post-Beijing. High on that list: Giving up-and-coming gymnasts a chance to showcase their skills on a big stage.

“At the time it was, ‘Okay, let’s figure out what can we do to give these girls the feeling and the opportunity as if they’re competing at the Olympic Games?’ That was my goal,” she said of the inception of the Nastia Liukin Cup, the 10th edition of which will take place March 1 in Greensboro, N.C. “I really wanted to find a way to give the next generation that feeling that I had when I made the junior national team for the first time. I remember finally feeling like I was part of something, because gymnastics is such an individual sport, even though there is a team competition and there is that team aspect to it.” 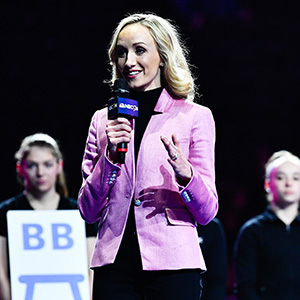 It wouldn’t be a normal, run-of-the-mill meet, she would make sure of that. The field would be made up of Level 10 gymnasts, who compete one step below the elite level, and culled from a series of qualifying meets held around the country. It would be on a podium and broadcast live on television. It would have the look and feel of a high-profile competition, because that’s just what it would be. Between the engagements and appearances that pepper an Olympic gold-medalist’s schedule, Liukin sat down with a team from USA Gymnastics and made her pitch.

“I knew what the experience was that I was trying to give these young women,” she said. “I really didn’t have that opportunity, and that’s another reason that I really wanted to create this. I remember sharing this idea at the very beginning, and people were like, ‘Okay, this seems like a great idea, but how are we going to make this work?’ I was like, ‘You know what? I don’t know, but we’re going to make this work.’”

Though not intended to be a competition that pinpoints Olympic-level talent, the Nastia Liukin Cup has nonetheless served as a launchpad for storied elite careers. Among the 36-woman field at the inaugural edition in 2010 was a young gymnast from Virginia named Gabrielle Douglas, whose daring and athleticism marked her as one to watch. In London 30 months later, Douglas succeeded Liukin as the reigning Olympic all-around champion.

Past Nastia Liukin Cup champions include NCAA standouts Mackenzie Brannan (University of Alabama), Rachael Flam (Stanford University), Charity Jones (University of Oklahoma), Alex McMurtry (University of Florida), Lexie Priessman (Louisiana State University) and Grace Williams (University of Nebraska). Five other participants — Douglas, Morgan Hurd, Ashton Locklear, Maggie Nichols and MyKayla Skinner — have gone on to win gold at the World Championships, while 2009 World vault champion Kayla Williams qualified to the meet in 2011 after stepping away from the elite level as she prepared to embark on an NCAA career at Alabama. 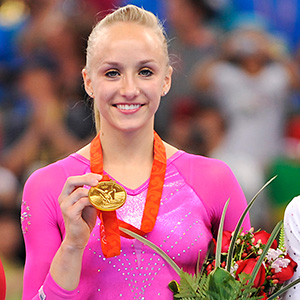 Of all the moments, it’s recalling Hurd’s 2014 performance that makes Liukin smile the most. “She wasn’t in our TV schedule, and to my producer, I said, ‘We have to show her!’” She’s not going to factor into the all-around race, the producer protested. Liukin insisted. “I go, ‘It doesn’t matter, she might not factor in today, but I promise you she’s going to factor in.’ And to this day they’re like, ‘You were right.’”

These days, the Nastia Liukin Cup is the first event of USA Gymnastics’ Triple Cup weekend that includes Saturday’s American Cup and Elite Team Cup, featuring junior elite male gymnasts from each region of the country. For the 36 who qualify, the Nastia Liukin Cup is sprinkled with special touches, including a gymnasts-only brunch hosted by Liukin on the morning of the competition.

“I ask that no coaches or parents are there, that it’s just me and the athletes. It’s me truly getting to know the girls, but even more so, these young girls getting to know the real me,” Liukin said. Ask me anything, she tells them. Discussions have ranged from how to deal with TV cameras hovering around the apparatus during the meet to unrealistic images of life projected by social media. “I’m very open and honest with these girls,” she added. “It goes way beyond gymnastics.”

“They’re definitely sparkly,” Liukin said with a laugh. “You’ll see a little number 10 in rhinestones and a few other special things throughout the leotard. I’m excited because this 10th year to me is so special. When you’re able to make it 10 years of anything, it’s exciting and it’s kind of a big deal. I’m truly looking forward to it.”